BoatUS: what it means for nation's 11 million saltwater anglers 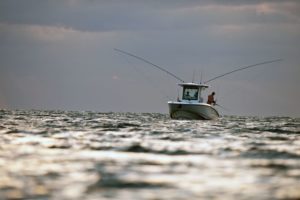 SPRINGFIELD, Va., Jan. 3, 2019 – With President Trump’s December 31 signing of the Modernizing Recreational Fisheries Management Act of 2018 (Modern Fish Act), saltwater recreational anglers just got a big leg up when it comes to the federal management of the nation’s fish stocks.

The act authorizes the use of management tools more appropriate for recreational fishing, and seeks out better and more accurate recreational harvest data. It will also study mixed-use fishery allocation and look at the impact and provide recommendations on catch share management programs.

“What the act does for saltwater anglers is to update critical public policy to help ensure fisheries management and oversight also works for recreational anglers,” added Kennedy.

Beginning May 1, 2019 all boat operators born on or after May 1, 1996 are now required to obtain a Safe Boating Certificate by completing an eight-hour safe boating course. Courses may be completed and certificates obtained through State Parks, U.S. Power Squadrons, or the U.S. Coast Guard Auxiliary. Previous law only required the operator of a personal watercraft or any youthful boat operator to obtain a Safe Boating Certificate. A new law signed by the Governor phases-in this existing requirement to all boaters beginning with those born on or after May 1, 1996. A list of approved courses is available on the State Parks website.

Keeping track of a NY Safe Boating Certificate is easier thanks to the Governor’s Adventure License initiative. If you have taken an approved safe boating course and received your NY Safe Boating Certificate, with just a few easy steps, you can choose to have your certification also reflected on your NYS Driver License, Non-Driver ID or Learner Permit as a small anchor icon. This DMV designation will eliminate the need to carry your boating safety certificate with you when boating. 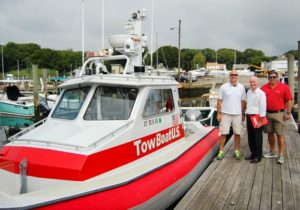 SPRINGFIELD, Va., Dec. 31, 2018 – A sign of the times, the U.S. Coast Guard reports that it’s common for recreational boaters today to use cellphones to call during a boating emergency. While Boat Owners Association of The United States (BoatUS) urges every vessel to have a working VHF radio with DSC (digital selective calling), the nation’s recreational boating advocacy, services and safety group also recognizes that cellphones are firmly embedded in boaters’ lives. But what happens when a boater tries to call 911 for emergency or routine on water assistance? Will the call go to the closest, most relevant rescue agency for a swift response?

Unfortunately that’s not always the case. But a provision in the recently passed Frank LoBiondo Coast Guard Authorization of Act of 2018 aims to improve reliability of the 911 system when recreational boaters need emergency help. In an effort to ensure timely dispatch of the closest potential rescue asset or on-water assistance provider, the Act requires the U.S. Coast Guard to review its policies and procedures to “formulate a national maritime Public Safety Answering Points (PSAP) policy.” There are more than 6,000 PSAPs in the U.S. – local 24/7 call centers with trained dispatchers that receive 911 emergency telephone calls and route them to the proper emergency service.

“This effort will help minimize the possibility of maritime calls being improperly routed and to assure the U.S. Coast Guard is able to effectively carry out its maritime search-and-rescue mission,” said Tina Cardone, executive director of the Conference of Professional Operators for Response Towing (C-PORT). C-PORT members, made up of on-water towing industry companies from across the country, contributed to the legislative effort. This included TowBoatUS Mystic owner Capt. Jeff Dziedzic.

“This was a grass-roots effort by many and took years of working with U.S. Coast Guard and elected officials,” said Capt. Dziedzic. “We care about this because of our occasional role in responding to life-threating events as good Samaritans, as well as answering calls for more routine requests for assistance.”

In a video recently captured from the floor of the U.S. House of Representatives, Rep. Joe Courtney (D-Conn.), Capt. Dziedzic’s local congressman, thanked the captain for bringing the issue to his attention. 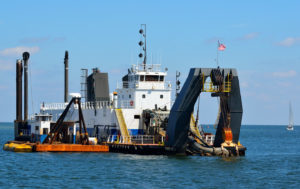 ALEXANDRIA, Va., Oct. 11, 2018 -- With passage yesterday of infrastructure legislation by the U.S. Senate, the Water Resources Development Act (WRDA) bill is on its way to the president’s desk. The nation’s advocacy group for recreational boaters, Boat Owners Association of The United States (BoatUS), commends Congress for taking action to support this crucial infrastructure legislation that will improve the waterways for boaters.

“While not the most high profile of issues coming from Washington these days, the WRDA legislation is ‘must-pass’ legislation for America’s boaters” said David Kennedy, BoatUS Manager of Government Affairs. “Getting this bill done will make a difference for everyone who enjoys spending time on the water.”

The 2018 WRDA bill contains funding authorizations and policy changes for a wide range of water projects including funding of environmental-restoration programs and dredging of smaller harbors.

WASHINGTON, October 1, 2018 – A safe place to hide from a storm. Better navigation. Cleaner waters. Ensuring that boaters matter when it comes to getting their fair share of federal funding. These are all things that boaters stand to gain with the passage of a bipartisan bill, S. 3021, America’s Water Infrastructure Act (AWIA) of 2018, which will provide critical funds and policy improvements for the nation’s waterways, reservoirs, levees, locks and dams. A Senate vote is expected soon.

Boat Owners Association of The United States (BoatUS), the nation’s advocate for boat owners, urges the Senate to say “yes” to the legislation, which also encompasses the Water Resources Development Act (WRDA) of 2018. “The bill authorizes the needed investment in waterways where millions of Americans recreate,” said BoatUS Government Affairs Manager David Kennedy. “It also promotes policies to address water-quality concerns such as the harmful algal blooms recently seen in Florida and the Great Lakes.”

BoatUS says recreational boaters will like the bill as it supports waterway-access projects, navigation and water-quality improvements, and provides maintenance funds for harbors of refuge. It also includes innovative policy changes such as a provision directing the economic benefit of recreational boating be considered for locks on the Allegheny River system. As the primary federal legislation that addresses waterways, AWIA/WRDA serves to keep this crucial part of the nation’s infrastructure working for everyone.

“Regular passage of WRDA bills is good news for American boaters,” added Kennedy. “Keeping up with water-infrastructure maintenance and updating the laws that deal with our waterways will help keep boating one of our nation’s favorite recreational activities.”

WHAT: The Modern Fish Act, an important, positive change to federal laws involving saltwater fishing is moving through Congress, and with limited time remaining on a busy legislative calendar, the U.S. Senate is expected to vote soon. Passed by the U.S. House of Representatives earlier this year, the Modern Fish Act (S. 1520) will help improve public access to America's federal waters, promote conservation of natural marine resources, and spur economic growth by fixing key issues in the law governing marine fisheries. Boat Owners Association of The United States (BoatUS) urges all saltwater anglers to ask their U.S. senators to support this legislation now.

HOW: Click here to take action with a prefilled message to your U.S. senators.

WHY: The Modern Fish Act is a comprehensive package specifically aimed at addressing the needs of the nation's 11 million saltwater anglers. It will improve management of fish stock, give better access to America's federal waters, and promote conservation of our shared natural marine resources. More about this issue can be found in BoatUS Magazine:

WHO: BoatUS is the nation’s largest advocacy, services and safety organization with more than a half million dues-paying members. BoatUS is the boat owners’ voice on Capitol Hill, helps ensure a roadside trailer breakdown doesn’t end a boating or fishing trip before it begins, and when boats break down on the water, TowBoatUS brings them safely back to the launch ramp or dock, 24/7. The BoatUS Marine Insurance Program gives boat owners affordable, specialized coverage and superior service they need. BoatUS also helps keep boaters safe and our waters clean with assistance from the member-funded 501(c)(3) nonprofit BoatUS Foundation for Boating Safety and Clean Water.